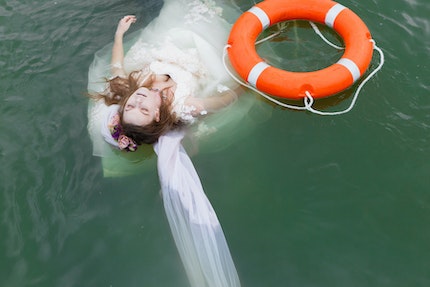 Bride Not To Be. Episode 18

The Cream Boat is a charming vessel that chugs its way up the scenic Brokenwood waterways. It carries sightseers and Christmas parties and often Hen Parties. Professional tennis player, Ophelia (Fee) Marley, is one such lucky Hen. Her Bridesmaids have organized a big day migrating from the township via the Cream Boat to the Tidal View Lodge where they overnight.

The following morning the Cream Boat returns to pick up the girls, but as the captain is about to dock a macabre and ethereal sight greets him. Fee is floating semi-submerged downstream in her wedding dress and veil. At first it may seem a tragic drowning; a result perhaps of too much revelry. But Gina reveals she was in fact dead before she entered the river.

Where was Fee’s fiancé the night of the murder? And why is Best Man Darryn so reluctant to co-operate? Is he covering for his mate or is it something else entirely? Darryn’s reticence is partially explained by the fact that he is deaf. Kristin’s knowledge of ‘sign’ comes in handy as the team works to solve this mystery.