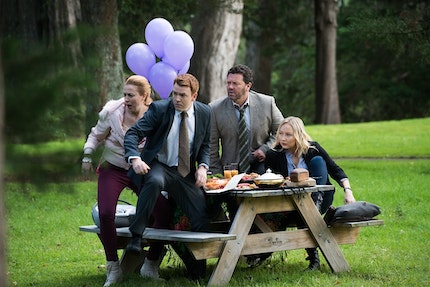 When Kristin, Breen, and Gina celebrate Mike’s birthday with a picnic in Brokenwood Domain, they are witness to a fatal skydiving accident.

To make matters worse, Kristin knows the victim – entrepreneur Andre Barrington, an ex-boyfriend who moved onto another woman – Grace Turner, an adrenalin junkie and fellow skydiver.

As the investigation unfolds, an unsettling truth is revealed. Andre’s parachute was never going to open as the cords were severed. Was it an elaborate suicide or was Grace having second thoughts about Andre?

Then again – Andre’s older brother Felix was tired of living in his shadow, and his mother Lorraine’s maternal love verged on the side of sinister. Both of them were jumping with Andre too. And what about Andre’s business partner Dean Young, who was less than impressed by Andre’s work ethic?

Mike and his team are forced to confront the old adage: ‘what goes up must come down’ – but not always in the way you want.